Take any given Saturday night dinner party, any given stranger, add any given conversation and include the rote question, “So, what do you do for a living?”. When it comes my turn on the receiving end, I'm almost inevitably met with a look of confusion tailed by the questions, “Aerial acrobat? How'd you get into that?”

The long answer... As a kid, I was obsessed with flying. I was convinced, in fact, that the only thing stopping me from soaring amongst my brethren birds was not yet having explored all of the possibilities. Jumping off of the patio led to diving off of lifeguard stations (not into water) and then off of roofs. By the time I began climbing onto second stories, my parents put me into gymnastics. I'm sure they thought that if I at least had some landing techniques, I might make it to the age of six.

My obsession quickly turned to sport. The instant I first saw a ribbon pulled out of a duffel bag and begin to take shape all around a lyrical, dancing body, my destiny flashed before my eyes... remember, it takes all kinds. I won my first national championship at 8 years old (my coach and I had to lie to the Federation that I was 9 in order to compete). By eleven, that ribbon was taking me worldwide. In all, I competed as a rhythmic gymnast for nine years, won five national championships, competed for the U.S. in eight countries and was an alternate on the 1992 Olympic Team. 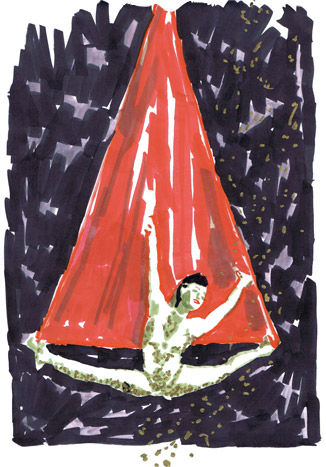 When I could no longer deal with the pressures and politics of gymnastics, I went back to high school for my senior year (I was in home study while I was a gymnast) where I was socially defunct (ie weird) after years of growing up around gyms and judges the world over. I went to Amherst College to study comparative religion (a subject very close to my heart to this day). But like high school, college proved to be an alien environment to me (albeit, I was the alien). Cirque du Soleil recruited me and practically overnight returned me to a "normal" life. I performed and was assistant choreographer on tour for 1001 shows. After touring, Debra Brown, head choreographer of CDS, invited me to join her dance company, Apogee, where I collaborated on merging circus and extreme modern dance with a highly talented and cutting edge group of artists. My Argentine heritage began beckoning me and took me to the mountains of California to create a show called Camerata Tango which was eventually given blessing in Buenos Aires by the Astor Piazzolla Foundation, the only show of its kind to receive the honor. A trip to San Francisco led me to a gorgeous Spiegel tent on the water called Teatro Zinzanni. A romantic mixture of circus, theater, comedy, music and dinner, I had not experienced anything like it of it's caliber in the States. Little was I to know that that visit was the spark of an eight year and running relationship were I was to perform, choreograph and associate direct for the shows in San Francisco and Seattle.

I have an aversion to name dropping, but for those of you reading this who like big names in a bio, in between and around and all through the afore mentioned experiences, I have performed and choreographed for Warner Brothers, Paramount Studios and Disney Films, The Tonight Show, Good Morning America, The Grammy Awards, The American Music Awards, Teen's Choice Awards, TV Land Awards, NBC, Fox Television News, Led Zeppelin and the U.S. Olympic Gymnastics Teams Tours. My work has been received on five continents in the fields of dance, circus, film, television, theater, opera, fashion and special events. My résumé below has all the details.

All work and no play makes Jack a dull boy. And although my work (at its best) is play, I'm going to round off this bio with some of my other interests. I'm a yogahead. I have been practicing for more than a decade and I am a Yogaworks certified Yoga teacher. I love to cook... from raw vegan (which is more like uncooking) to the traditional Italian and Spanish dishes of my ancestors. And I have an obsession with California native plants in which I indulge in on the land all around my home in Los Angeles. Oh yeah, and I still read religious history and theology books like they are crack.

Love to you all.